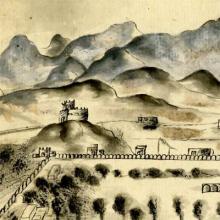 The Escárcega family library was built by, Gildardo G. H. Morales Díaz of Apetatitlán, Tlaxcala, México [b. 1899]. Mr. Morales Díaz was a self-taught bibliophile and was a founding member of the Instituto Panamericano de Geografía e Historia. Having survived a tragic loss as a young man during the Mexican Revolution, Mr. Morales Díaz dedicated his life to the study and understanding of Mexican History. With few possessions including books, the family moved to Puebla. He started collecting more books in the early 1920s, building the library over time by adding important manuscripts and broadsides. The Morales de Escárcega Collection includes over 2000 books, just under 80 broadsides and manuscripts, as well as some photographs. Included in this digital collection are the manuscripts and broadsides included in the collection.